Archerfish are a brackish water fish found in coastal regions of India, Persian Gulf, the Malay Archipelago, Indonesia, Australia and the surrounding islands. The best-known species of Archerfish is the Toxotes jaculator, the one in which we will cover in this piece.

Most aquarists will know of this fish and be intrigued by its namesake, the ability to shoot down insects with a shot or spout of water from overhanging leaves and branches. 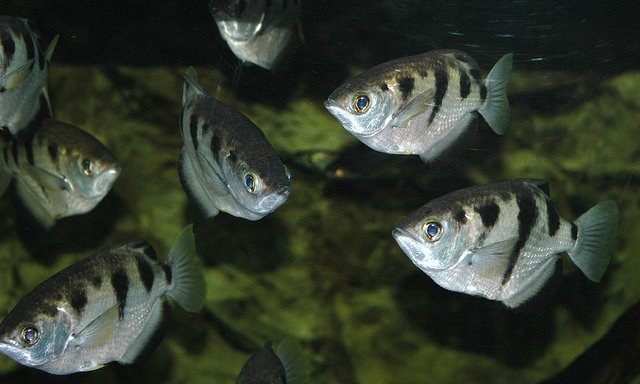 Behaviour - Peaceful but may be territorial with same species

Archerfish are a brackish water fish - the set up will be covered further on - however, they have been known to tolerate both completely freshwater and a marine habitat - although this isn’t recommended.

The minimum tank size mentioned in the quick stats section may seem a little excessive for a 10-inch fish but this is because its best to keep them in groups of 5 or 6 and more.

The ideal setup should be something known as a paludarium, a type of aquarium - more like an enclosure - that has both underwater life and plant life above the water's surface. This is to accommodate the insects that will take refuge on the leaves and stems of plants and allow the Archerfish to execute its natural behavior of shooting them down.

The temperature also appears to be higher than that of most other tropical fishes. It is a common misconception with Archerfish that they can cope with temperatures as low as 22 ℃ / 71.60 ℉, they are extremely susceptible to cold or cool water and many Archerfish in the aquarium don’t live their expectancy due to aquarists keeping them too cool.

Setting Up Your Brackish Water

For those of you who don’t know, brackish water systems are a mix of both freshwater and saltwater found in coastal areas and, depending on tidal conditions, can also reach a few miles both upstream and out to sea.

In order to properly get your water set up a piece of equipment called refractometer or hydrometer should be purchased to get accurate readings. A hydrometer measures the salinity in the water through refracted light.

A good measurement to have, that most brackish water will tolerate, and more importantly those that can be housed with Archerfish, is a reading of between 1.005-1.010.

This piece of equipment is essential if you are serious about keeping a healthy brackish aquarium.

A is an aquarium style set up that has an extra dimension to that of the standard aquarium, it has the obvious life underwater and also life above the water level. Just google the word and be amazed by the images that come up.

They are surprisingly simple to set up too if done correctly the first time. You can either buy them already set up, but there are kits that allow you to convert your own tank or even fake rockwork with areas to put plants and soil.

This style of setup is, in my opinion, an essential one for Archerfish, as most people purchase them to see their unique behavior, and without this kind of setup, that will never happen.

Due to the relatively high salt content for freshwater it is difficult to choose the perfect live plants to sit in the substrate, below is a list of some of the best plants to use in a brackish tank:

Each of the plants listed above is also very low maintenance and so should not need any special requirements like fertilizers.

When choosing your land based - terrestrial - plants its best to go to a garden center and choose some easy to maintain plants to start with.

Pick those that are best in slightly humid conditions and with broad or overhanging leaves. I, unfortunately, can’t give any suggestions here, I’m not going to pretend to be an expert, so ask for the help of those that are.

Let's start at the bottom and work our way up. For the substrate I’ve found that a mixture of substrate works best, a mixture of around 80% sand and 20% of a medium grade pea gravel, but this bit is clearly to the keeper's taste.

Also add in some river rock, nice rounded rock, just choose a few pieces and almost drop them in, don’t place them, this will aid in the natural look of the aquarium.

When choosing bogwood use only one type, as a few different types of driftwood don’t look right. Use some pieces that break the water's surface and protrude to fully utilize and blend the two environments of the together.  Try to do the same with some of the rocks you choose to add.

With this style of setup, there are several options when considering your tank filtration.

Before I get into electrical equipment, and although I will always recommend a filter in any aquarium, I feel as though I have to mention that due to the nature of the live plants and how many you will be using, some aquarists might not use a filtration system as plants absorb most of the nutrients and waste. Most of them will just use a powerhead or wavemaker for water circulation.

When choosing electrical equipment both internal and external filter will do, although an external may be easier to access when the tank is full. But again any decent filter will do, the best I've found are Eheim and Fluval brands. You might also think about attaching a waterfall feature for an added effect.

When the Archerfish get to their full size, and as mentioned begin to be territorial with each other they might bang into to heaters and knock them against the glass.

Because of this either buy yourself a heater guard or get a heater like the Fluval E, they’re made of plastic and with an LCD display that shows alerts and the actual temperature of the water, not just what the heater is set to.

Archerfish will eat a wide range of foods in the aquarium, going for any food that mainly floats on the surface of the water.

Primarily in the wild they will feed on insects and do what is expected from them, shooting them off leaves and branches. However, they will also eat any good quality flake and pellet.

When they become fully accustomed to the aquarium lifestyle they will also eat most frozen foods too. They aren’t picky eaters so the dietary needs of these fish are easy to cater to.

Take a look at this video by Jonathan Garcia feeding his Archer fish:​

When it comes to the routine maintenance in the aquarium special conditions need to be met in order allow for the brackish water. The water needs to be near enough to the parameters of the tank, especially the salinity of the water, so use your hydrometer again to get it perfect.

This might take a while the first time, but you will soon get used to the good amount of salt to use.

Archerfish are said to be monomorphic and so sexing them is impossible.

If breeding is the intention, it's advised to get a large group. When spawning occurs, two fish will pair together and spawn at the surface of the water with up to 3000 eggs that will hatch in around 12 hours or so.

This is always going to be a tricky section, with an obvious lack in brackish fish on the market, it's also a type of water that most fish stores don’t seem to stock for some unknown reason. But I will do my best in selecting some species I believe will be the best.

While this is a great option when all the fish are young, most problems occur when the fish get larger. Many aquarists do put them together, and when looking online most other sites will say to house them together. But as I said problems may happen later in the aquariums life.

With the tank having either a slope or a , the Mudskipper will love the environment and not be in direct contact with the Archerfish for either of them to show aggression to each other. An honestly perfect and yet again unique addition.

Fiddler Crabs go with Gobys just perfectly, they don’t bother each other and aren’t particularly predatory. Males have the one large claw, used for fighting amongst other males to attract a mate, and another small seemingly more pathetic claw used for scavenging for food. They are more seen as part of an aquariums clean up crew.

Having these in your Archerfish tank will give it quite a few focal points if using a good setup you might even consider other creatures like newts, frogs, lizards, snakes etc. the possibilities are vast with this style of setup.

So enjoy your Archerfish, they truly are a unique and beautiful creature.