If you’ve dreamed of creating a vibrant display within your freshwater aquarium, you couldn’t ask for better than Congo tetras (Phenacogrammus interruptus). 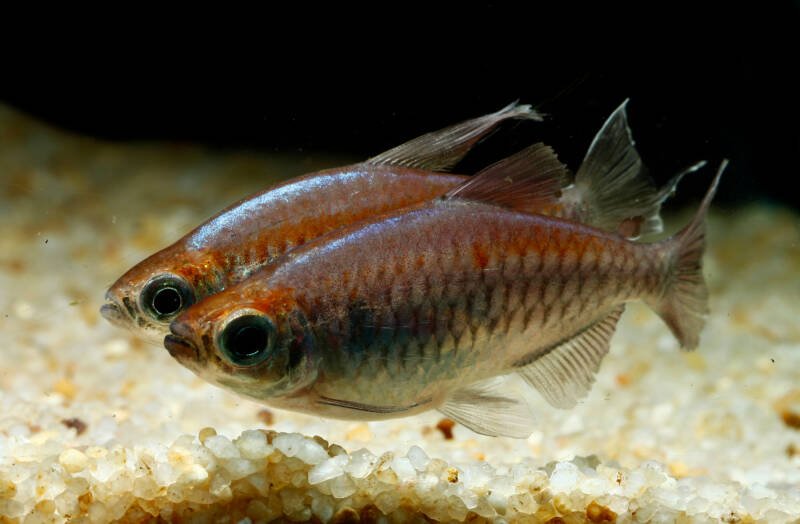 With stunning scales in every color of the rainbow, topped with an iridescent sheen, they’re perfect.

Congos are African members of the Characin family. They’re also one of the more recent tetras to gain popularity with aquarists.

The species earned its name in 1949, but they proved tricky to breed, leaving aquarists to take them from the wild.

Finally, in the 1970s, a Florida fish farm experimented and finally stumbled on the breeding solution.

At long last, aquarists were able to add these vibrant freshwater denizens to their aquariums.

Now, most of the Congos that appear in fish stores descend from that line.

While hardy in nature – like most tetras – Congos aren’t recommended for novice aquarists.

They have exacting care demands that beginners may struggle with. You’re better off gaining some experience first, and then you can add these gorgeous fish to your community.

As you’d guess from their name, Congo tetras call the Congo River in Zaire their home.

They school in streams, marshes, and pools with lower light conditions and bottoms composed of a mixture of sand, silt, and mud.

The tributaries Congos prefer to have a heavy silt burden, producing blackwater conditions. The water is slightly acidic with low visibility.

The fish hide out where the plant cover is thickest, especially greenery with long stems they can dart in and around. 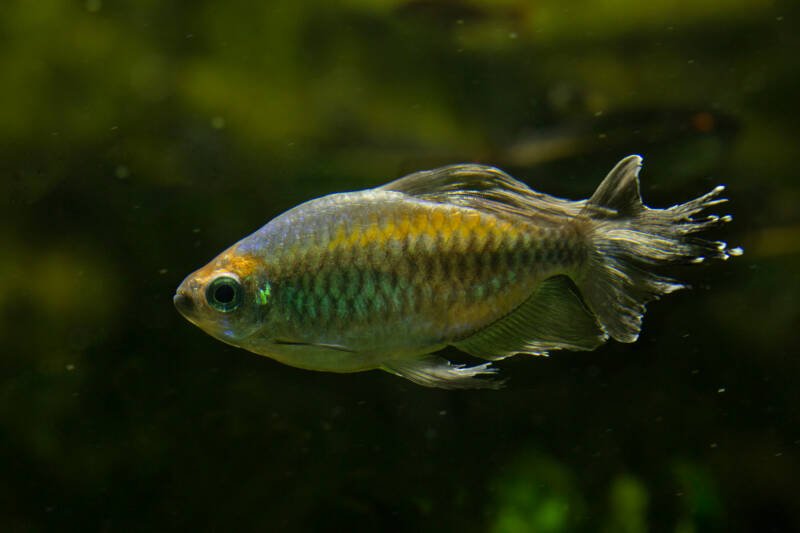 You’ll probably only see 3.5 inches (9 cm) in your aquarium, though – and that’s for males. Females only reach about 2 inches (5 cm) in length.

If you want to get the maximum length out of your Congo tetras, make sure you choose the largest possible tank.

Aquarists that provide more space than recommended while maintaining the best water quality tend to see their fish grow the longest.

Unfortunately, this is a freshwater species prone to stress, which can cut down on that lifespan.

If you want your fish to live as long as possible, stay on top of their management needs. 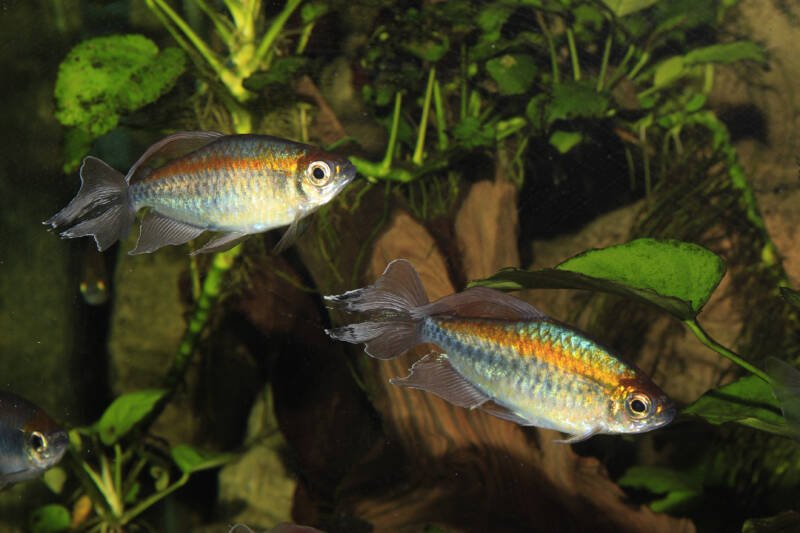 Congos are schooling fish. A minimum of six will ensure your fish stay free from stress.

They’ll shoal together throughout the day, forming dazzling patterns as they explore the tank.

You may see one or two drift off to check out something interesting, but they’ll always rejoin the group.

If you feel up to the tank size, a single-species aquarium of up to twenty Congo tetras works beautifully.

However, if you want to go smaller, make sure you keep a ratio of two or three females for every male. This prevents aggression from breaking out during spawning. 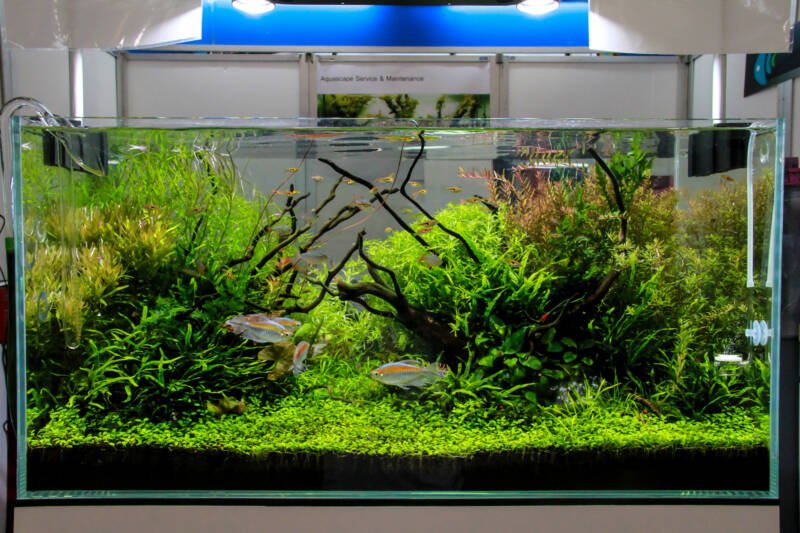 However, if you want to provide proper conditions and hit that minimum shoal size of six, you really shouldn’t go any smaller than 55 gallons (208 l).

That many fish (plus any others, if you decide to create a community) warrant a proper filter.

Canister filters work best for keeping waste levels to a minimum. Or you can choose an appropriately-sized HOB filter with carbon filters.

In the wild, Congos gravitate to blackwater regions.

They’re a hardy species, and they WILL tolerate a range of water conditions, but if you don’t stick to their optimal needs, those beautiful rainbow colors will fade, and the flowing fins could suffer damage.

The region of the Congo these fish inhabit is tropical. As such, they prefer a water temperature near 72-82°F (22-28°C).

That said, a target of 76°F (24°C) is their sweet spot. You want to keep the temperature as stable as possible to prevent stress.

Blackwater tanks need to have slightly acidic conditions. While they’ll tolerate a pH range between 6.0-7.5, you should aim for the lower end of the spectrum (say 6.0-6.5).

You also want softer waters, around 3-18 dH. Remember, stability is the key with Congos. 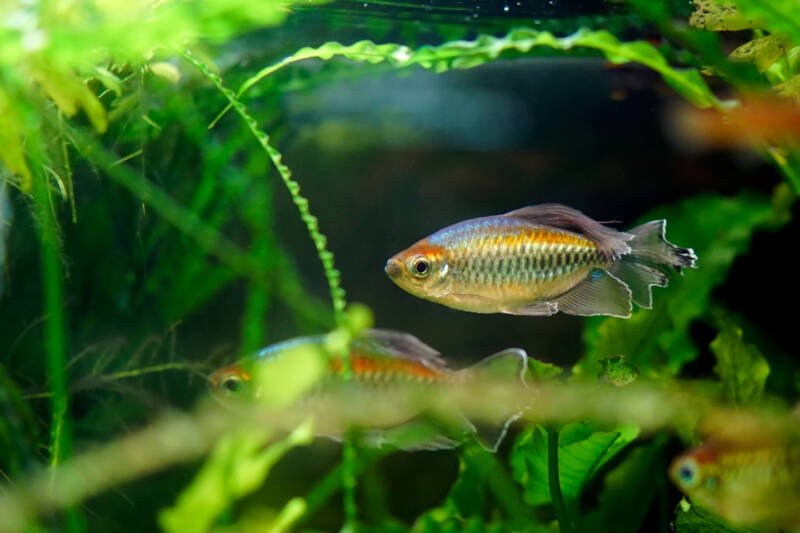 While Congo tetras prefer to swim in the middle and top of the water column, they appreciate a tank that mimics their native habitat.

That means dark and sandy substrates along the bottom. You’ll benefit from the darker color, too, as it’ll allow the shimmery scales to stand out.

Dim lighting is the next step. You can lower your lights, or you can fill the top of your aquarium with floating plants.

You don’t want to skimp on the greenery in the tank, though. Congos need plenty of hiding places to feel safe and secure. (They’re shy by nature)

When choosing plants, keep in mind the fact that Congo tetras ARE omnivores. If you place soft, tender plants, they WILL snack on them and end up destroying the stems.

You want more robust options. Good choices to split the difference include:

Congo tetras prefer the company of their own kind. That isn’t to say you can’t combine them with other colorful freshwater fish to make a stunning aquarium, though.

So long as you pick the right tank mates, you can create a vibrant display.

Congos have peaceful temperaments despite the glimpse of sharp, prominent teeth you may happen to note.

(They ARE tiny, though, so don’t be surprised if you miss them) As such, you need to choose fish with similar personalities.

You should also look for species around the same size.

If placed in an aquarium with larger fish, your Congos will feel threatened and spend all of their time hiding. Ideal tank mates include:

Despite sharing the same habitat with many cichlids, you don’t want to pair your Congos with ANY of the African species.

They’re too aggressive and large to mix with your frightened, shy rainbows.

The smaller cousins from South America are a better match.

They’re also too much of a temptation for fish with nipping habits. As such, avoid adding such fish to your tank.

You also want to skip other large, aggressive species, such as red tail sharks. 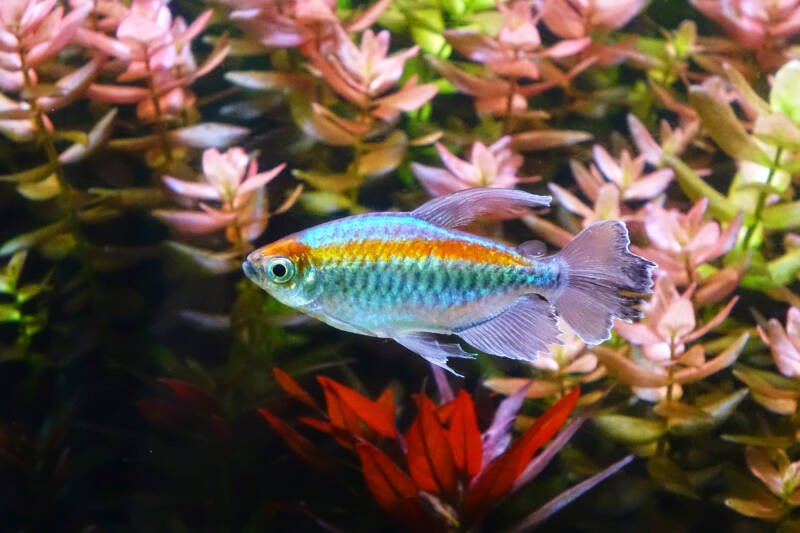 As opportunistic omnivores, Congo tetras are a cinch to feed.

In the wild, they snack on the local vegetation, insects, worms, and even algae. You’ll find your shoal just as easy to appease come mealtime.

Commercial fish foods work fine, though you may not observe your Congos darting to the surface to feed.

They’re one of the shyer species out there, and they don’t like you watching while they eat.

Consider preparing a homemade fish food they can nibble on instead.

Freeze-dried, live, or frozen protein sources work well, especially if you can leave them in the tank and walk away. Congo tetra favorites include:

While adding in small pieces of peeled and blanched vegetables is okay, keep a close eye on your Congos.

If you see them repeatedly nibbling the ends of your aquarium plants, that’s a warning they’re not getting enough food. 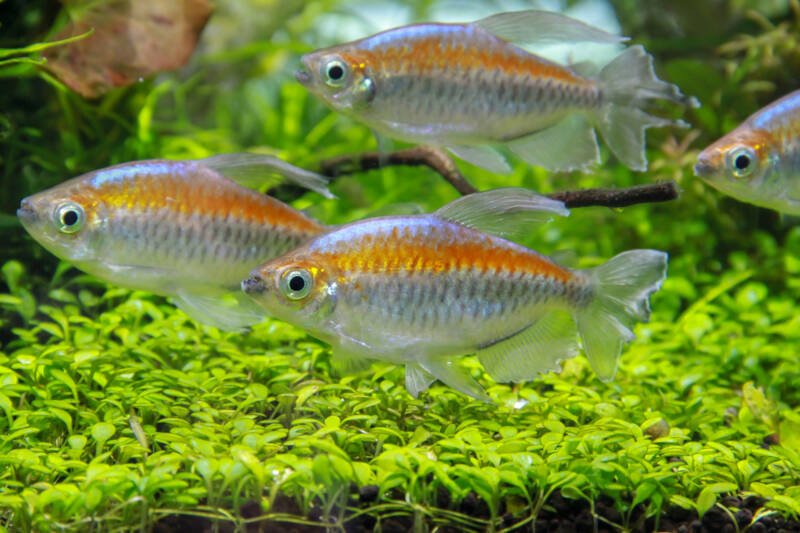 It took aquarists close to 20 years to figure out the proper method for breeding Congo tetras in captivity.

The problem, it turned out, was providing enough space for the process. After all, Congos are larger than other tetras, and they produce A LOT of eggs!

Both male and female Congos share rainbow scales. The blue on the top and bottom flows into red and gold in the middle.

Both sexes use the flashy display in their courtship ritual, too. This is a break from most fish species, but it’s still easy to tell the two apart.

Male Congos are much larger than females. The delicate, flowing fins are also more elaborate on the males.

The dorsal fin is more pronounced, and the caudal fin extends in the middle. You’ll also find a purple tint to the fins with a white border.

In contrast, the females don’t have those gorgeous fins. They also tend to have more golds, silvers, and greens to their scales.

Females’re still colorful, but it’s a slightly different palette than you find in the males.

NOT a Quick Turn-Around

You need to set up a specific breeding tank if you want to produce Congo fry successfully.

A 20-gallon (76 l) size is the MINIMUM you should use. Obtain enough peat moss to loosely cover 1 inch (2.5 cm) of the bottom and boil it to remove any unwanted contaminants.

Fill the tank with distilled water and allow the peat moss to settle for several days.

Then you’ll need to add some clumps of Java moss. These will serve as the spawning area. Add a heater and set it for 77°F (25°C), but DON’T add a filter – it’ll disturb the peat moss.

Shortly before you turn the lights out for the night, add your chosen pair of Congos to the tank.

Around dawn, the couple will dive in and out of the Java moss, depositing and fertilizing the eggs.

Once the pair finish, you need to remove them, or they’ll eat the eggs. Some of the eggs stay in the moss, but most fall into the peat.

By three months, they’ll double that size and start showing their rainbow colors.

You can sex them at that point, though they won’t be ready to breed themselves until six months.

Congo tetras have a hardy reputation, and they don’t have any species-specific diseases you need to worry about.

Unfortunately, if you don’t stay on top of their care demands, stress builds up, and their immunity will crash.

When stress gets into the equation, Congos tend to succumb to Ich.

No aquarist likes battling this pest, but there IS a silver lining. Unlike other fish, their hardy nature means the outbreak tends to confine itself to the affected fish. And you can use standard treatment without a problem.

Congo Tetras: Are They for You?

Now that the mystery of breeding Congo tetras is solved, they’re easy to find.

You’ll spend an average of $5-$7 per fish. And since you need to keep them in schools, many stores offer discounts if you’re willing to buy a group.

You need to keep in mind that most of the Congos offered in fish stores are juveniles.

They’ll be on the smaller side, and their colors may not be as impressive yet.

You won’t see that vibrant rainbow or those stunning fins until they’re in the proper environment with a healthy diet.

If you want to keep the best-looking school of Congos, have a large aquarium on-hand. And make sure you set up the proper blackwater conditions.

Then look to maximize their diet with variety, so the colors shine their best. You’ll see your adults flourish into the beauties you crave.

Congo tetras are one of the larger tetra species, with iridescent scales and flowing fins.

They have demanding care needs that make them a poor choice for beginners, but they’re beautiful additions to any freshwater aquarium if you’re up to the task.

Have you kept Congo tetras? How large have your fish gotten?

Have you successfully bred your Congos?