The flame tetra (Hyphessobrycon flameus) has several common names, including the Von Rio tetra. Other names are fire, red, or orange flame tetra.

This small, tropical fish originates from South America and is one of the most popular aquarium fish today. 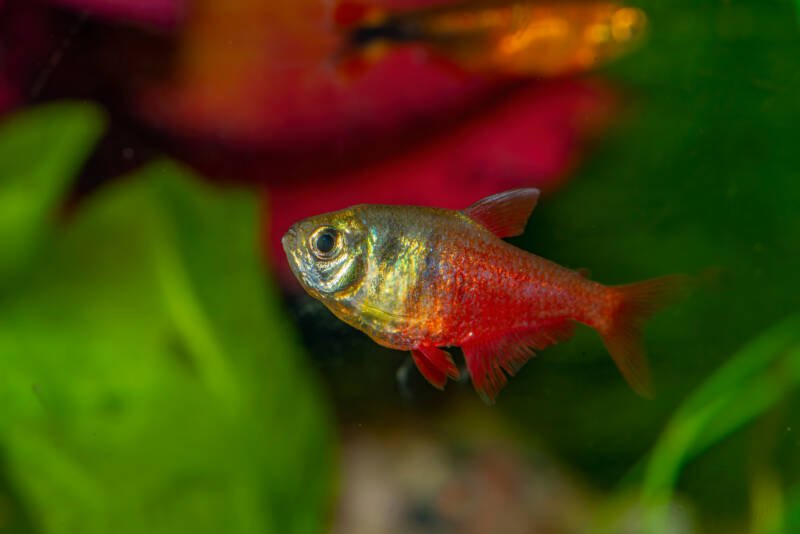 Flame tetras are peaceful fish, easy to care for, and are not especially picky eaters. They tolerate a wide range of water temperatures and conditions, and their schools make a beautiful addition to a community tank.

Flame tetras originate in South America. They prefer the coastal rivers in southeastern Brazil, especially those leading to Guanabara Bay in the Rio de Janeiro region.

They can be found in Paraiba do Sul and the Guandu Rivers. Small populations also exist in the Sao Paulo region, but these may be due to commercial breeders.

The breed was introduced to the United States in 1920, and for many years was a popular home aquarium addition.

While common in household aquariums, the flame tetra is infrequently found in the wild. Wild populations of flame tetras have declined due to habitat destruction, pollution, and invasive species.

The flame tetra has been on Brazil’s list of threatened species since 2004.

Their favorite habitats are slow-moving, shallow waters, such as streams or tributaries. These waters tend to have plenty of submerged vegetation, clear or brownish water, and sandy bottoms.

At a glance, male and female flame tetras are difficult to tell apart. They each have silvery bodies with a flame-red coloration of the fins.

The males’ coloration is more vivid, with two dark spots on the forward part of their body. They can turn almost completely bright red.

The females’ bodies are larger and more rounded, especially when they are ready to spawn.

Their lifespan is three to five years.

Tetras are typically peaceful, easygoing additions to a well-thought-out aquarium. Consider pairing them with fish of similar sizes to keep things comfortable.

A schooling fish, the flame tetra is best when purchased as a group of anywhere from six to ten fish.

A mix of male and female fish will allow for healthy interactions and behavior.

In addition, you may find your fish more brightly colored as the males compete for attention from the females.

Flame tetras have a peaceful temperament, both toward their own species and others.

They are compatible with other peaceful fish, such as danios, rasboras, and some bottom dwellers.

They also pair well with other small tetras, such as neon tetras. These types of fish will complement the flame tetra’s nature.

Avoid pairing them with larger tetras as the opportunistic feeders may eat the smaller fish.

Flame tetras flourish in a wide range of water temperatures, anywhere from as low as 64°F to as high as 85°F. Most sources recommend a temperature between 72 to 82°F.

Install a filter with a water flow that is four to five times the volume of water in the aquarium.

Consider, at a minimum, a tank size of 24 by 12 inches, or 15 gallons. This size is suitable for holding a school of six to seven tetras.

Keep the lighting low for the tank and replace 25% to 50% of the water every other week.

Line the bottom with a substrate and include some decorations such as driftwood, caves on the bottom to create shade and hiding spots.

Add some leafy aquarium plants to provide cover. A few dried leaves sprinkled in the tank will lightly stain the water and provide natural microbes as they decompose.

In general, a rule of thumb with tetras is to plan for two gallons per fish. Thus, a 15-gallon tank could hold a school of seven tetras.

That does not give much wiggle room, as you may want to add plants, other objects, or other species.

Flame tetras are omnivorous and will eat a variety of flake, fresh, and live foods. Fresh or frozen brine shrimp or bloodworms, mosquito larvae, or Daphnia are great treats.

They will also eat organic material, such as algae or detritus.

Feed your fish flake, granule, or tablet fish food several times per day in small amounts that they can consume quickly. This will help avoid the buildup of too much organic material in the tank.

The flame tetra spawns and scatters eggs. To successfully breed your tetras, set up a separate spawning tank with conditioned water and dim lighting.

To keep the parent fish from eating the eggs, line the tank with a mesh that allows the eggs to fall through to the bottom of the tank.

Another technique is to add objects that the eggs can attach to, such as grass-type plants or spawning mops.

Check that the water has a pH that is neutral or slightly acidic and raise the temperature to around 80 degrees.

Install an air-powered sponge filter to circulate the water.

Add a single pair, cover, and leave the tank. Check the next morning for egg deposits, which will appear small and clear.

Once you see them, remove the adult fish. The eggs should hatch in one to two days.

The newborn fry are very hardy and resemble tiny shards of glass. They first cling to the plants, then become free-swimming on about day three.

Begin feeding the fry small amounts of food such as infusoria, paramecium, or 5 – 50 micron-sized dry food.

At about six months, the young tetras will have grown to a size where you can add them to your community tank.

While flame tetras are a hardy species, they can pick up parasites or bacterial infections. Keep the water conditioned and clean to protect your fish.

Overall, the flame tetra is an excellent choice for a starter fish. You can easily add them to a community tank of similarly tempered and sized fish.

The fish can tolerate a wide range of water conditions and temperatures and are easy to breed.

Consider purchasing them in groups of at least six to allow them to school. At a typical cost of less than $4 per fish, a small group would cost less than$25.

Have you kept flame tetras in your tank? What are your recommendations for someone looking to start an aquarium with flame tetras?