Lionhead goldfish are one of the most striking and oldest varieties of goldfish. 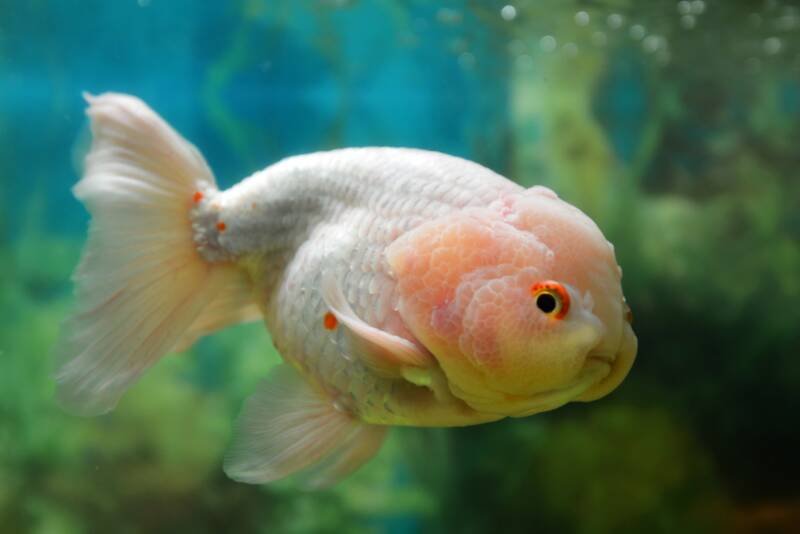 This noble species hails from Asia but has since become popular with aquarists around the world, who are attracted to its unique wen and remarkable silhouette.

Its peaceful temperament and tranquil movements distinguish it as being as graceful as it is beautiful, understandably contributing to its prevalence in the community.

However, this splendor is offset by its delicacy and special requirements. It may be captivating to look at, but only aquarists who are prepared to meet its specific demands will be able to truly enjoy the lionhead goldfish for the length of its impressive lifespan.

How to Identify a Lionhead Goldfish

The most striking feature of the lionhead goldfish is its wen, a fleshy growth or hood around its head that resembles a mane (hence the name). It features a raspberry-like texture and is bumpy rather than smooth.

Wens vary by individual fish and can either grow to encompass the entirety of the head or hardly appear at all.

Lionhead goldfish have rounded bodies that are almost egg-shaped and come in a range of colors. They are most commonly bred in red and orange but are also available in blue, black, calico, and tri-colored.

These goldfish are often confused for oranda goldfish, and vice versa. However, oranda goldfish can be easily identified by their dorsal fin. Orandas are also less round and feature less impressive wens.

Because of its size and missing fin, the lionhead goldfish is neither a fast nor an entirely stable swimmer.

Instead, they are fairly slow-moving and may have trouble with their eyesight, especially if their wen begins growing over or near their eyes.

But despite their clumsiness, lionhead goldfish are otherwise wonderful community inhabitants. They are peaceful and get along with a large range of similarly-tempered species, and are not prone to aggression even during mating season.

These fish are happy both as individuals and in communities. They don’t appear to show a preference for either situation, as long as they are heartily fed.

Origins of the Lionhead Goldfish

Lionhead goldfish did not actually exist in the wild; they were specifically “designed” and bred for their striking but unwieldy features.

They originated from a species of wild carp in Asia. This carp inhabited slow-moving and sometimes stagnant waters in rivers, lakes, and even ponds. After centuries of breeding, the wild carp morphed into the domesticated specimen you see today.

Now, lionhead goldfish are commercially available around the world and are just one of over one hundred captive-bred goldfish varieties that grace today’s aquariums.

Though they look strikingly different today, lionhead goldfish still maintain some traits from their ancestors, namely their size and lifespan. Like other goldfish, lionheads can grow up to 10 inches long and may live as long as 20 years or more.

Lionhead goldfish can grow anywhere from 5 to 10 inches and, like most goldfish, are very messy eaters. As such, they should be kept in a minimum of 20 gallons.

Keep in mind, this is only for one goldfish— an extra ten gallons is needed per other fish. For community tanks, it’s recommended to have 50 gallons or more.

These fish are absolutely not appropriate for nano tanks.

Lionheads are also very sensitive and not hardy, and are prone to infections in their wen and fin tears.

Because of this, it’s recommended to have a very basic tank setup that doesn’t include any sharp, abrasive, or otherwise rough décor or equipment.

Sand and smooth stones are the most popular substrate and aquascaping options. Some aquarists have even been known to keep a bare-bottom tank. Plants are optional; goldfish love them, but also love to nibble on and dig them up.

Driftwood, coarse rocks, and abrasive décor all pose potential threats to lionhead goldfish and should not be kept in the tank.

Aquariums should be horizontal rather than vertical or columnar in order to provide the maximum amount of surface area possible.

Though goldfish will inhabit all levels of a tank, their eyesight makes wider spaces infinitely easier to navigate than taller spaces.

These goldfish are very sensitive to water quality and are not hardy at all, meaning that regular and large water changes will be necessary.

But despite their high maintenance, they require only basic equipment for their tanks:

Lionhead goldfish don’t need a high water flow, and can actually be adversely affected by high currents because of their struggles with swimming.

However, having a low to moderate current in the tank is beneficial to prevent stagnant deposits of food and waste.

Water parameters must be stable and specific in order for your lionhead goldfish to live long and well.

Their relative fragility makes them a difficult species to keep sometimes, but aquarists who can meet the standards below will find it well worth their investment.

Ammonia, nitrites, and nitrates must all be kept as close to 0 ppm as much as possible. Even levels as comparatively low as 2 ppm can have devastating effects on lionheads.

Regular water testing is recommended so that required adjustments are quickly identified and addressed.

These water parameters may seem strict, but in reality, are easily attainable with regular maintenance and careful attention.

Because of their struggles with swimming, lionhead goldfish are not able to compete for food.

Fast-swimming fish, therefore, do not make good tank companions, including the common, comet, and shubunkin varieties of goldfish.

They also should not be kept with aggressive fish or fin-nippers, as their cumbersome size and temperament renders them unable to defend themselves.

Body wounds and ripped tails can quickly lead to infection and other health problems, so with this fish, your motto should be, “better safe than sorry.”

Despite this, aquarists should not feel discouraged from setting up community tanks. There are still several options that would make wonderful tank inhabitants along with lionhead goldfish, such as:

When in doubt, it is always better to keep a lionhead goldfish as an individual or among members of its own species.

What your aquarium may lack in variety in these cases is quickly made up by the elegant beauty and natural activity of lionheads. 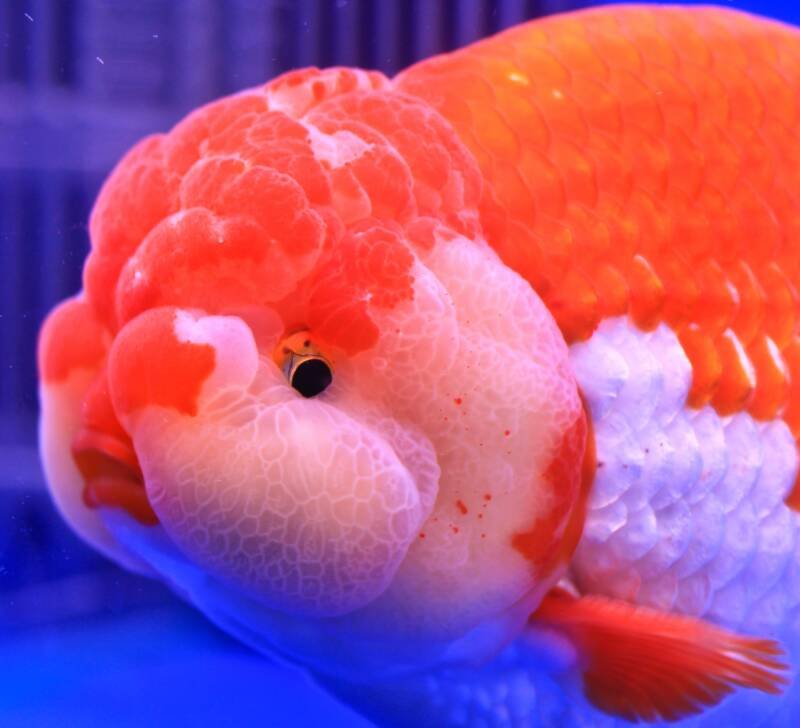 They may be delicate in terms of health, but lionhead goldfish have a hearty and voracious appetite.

These omnivores will scarf food at any point throughout the day and in any quantity, although they should only be fed twice per day at the most.

They enjoy live, frozen, freeze-dried, and flake and pellet varieties. Below is a list of some of the foods they’ll happily accept:

Meaty foods should serve as a supplement and should only make up half of their diet, at the very most. There should be a balance between meaty foods, flakes/ pellets, vegetables, and plant matter.

Because of their eyesight and swimming impairments, lionhead goldfish may need more attention during feeding times.

You may have to feed them separately, devote extra time for their feedings, or even use a tool such as tongs or a syringe to ensure they receive enough to eat.

The delicate nature of lionhead goldfish means that aquarium keepers should always be vigilant to ensure their fish are healthy.

Poor water quality, poor tank hygiene, and previous or current injuries are common causes of fish diseases and death. The lionhead’s preexisting conditions make them particularly susceptible to the diseases listed below:

Swim Bladder Disease is another ailment that often affects goldfish; it presents abnormal swimming patterns and causes balance issues. Feeding defrosted frozen peas has been reported as a potential cure to alleviate symptoms, though it does not work in all cases.

Constipation and bloating are another common health issue, caused by a poor or improperly balanced diet.

If this affects your lionhead, reassess your current diet, and make sure to take into consideration external sources of food, such as plants in the tank.

In general, the lionhead goldfish is not suited for beginners. Though some may be tempted, the lionhead’s care requirements, delicate health, and unique physical characteristics place this fish beyond the means and knowledge of novices.

But these same traits do not make them undesirable— instead, they elevate the lionhead goldfish to a worthy member of any aquarium.

The lionhead goldfish’s striking appearance, bold features, and noble background make it an industry favorite and have gained both notoriety and popularity from its original introduction in the industry.

It continues to delight aquarists around the world and will surely continue to do so for many years to come.