Last night, you found a worm in your fish tank. It isn’t like the other ones, though. No, it has a spade-shaped head, comes out at night, and crawls the tank’s walls.

They’re flatworms, one of many different creatures in the phylum Platyhelminthes. Some of planaria’s more noted cousins include tapeworms and the dreaded fluke worm.

Unlike its cousins, planaria are non-parasitic. They are, however, incredibly successful predators in their own right.

Every seasoned shrimp breeder knows the pain of finding planaria in their prize show tank.

They leave a trail of toxic slime that paralyzes shrimp and certain other invertebrates. This can lead to death in its own right, but when a paralyzed shrimp or snail is found, they’re promptly eaten alive by planaria.

Planaria also enjoy shrimp and snail eggs, so if your breeding tank is no longer producing as steadily, you may have a planaria infestation.

There’s another big reason they’re so successful when given an all-you-can-eat buffet of shrimplets and leftover food. Cut a planarian in half — now you have two planaria.

They reproduce asexually, in a process called binary fission, in addition to reproducing sexually.

This doubles their ability to overrun an aquarium, especially a dirty one with plenty of food laying around.

How to Identify Planaria

Let’s make sure you have planaria in your home aquarium before you carpet bomb it with deworming medicine.

There are several types of “worm” prevalent in freshwater aquaria, and quite a few are harmless. Even more, some are beneficial.

Black worms are a great addition to a clean-up crew in more naturalistic aquaria.

I maintain a wonderful Walstad tank with tons of aquatic isopods, black worms, and other assorted clean-up crew that aid in the natural cycles of the tank.

Here are some identifying factors of planaria:

Color is not a very useful identifying factor for planaria.

The most common pest species of planaria people are concerned with are brown planaria and white planaria. Their common names can be misleading, though.

Planaria’s diet affects coloration quite a bit due to their translucent bodies. This allows brightly colored food waste, such as leftover bloodworms or dried fish flakes, to alter their appearance. 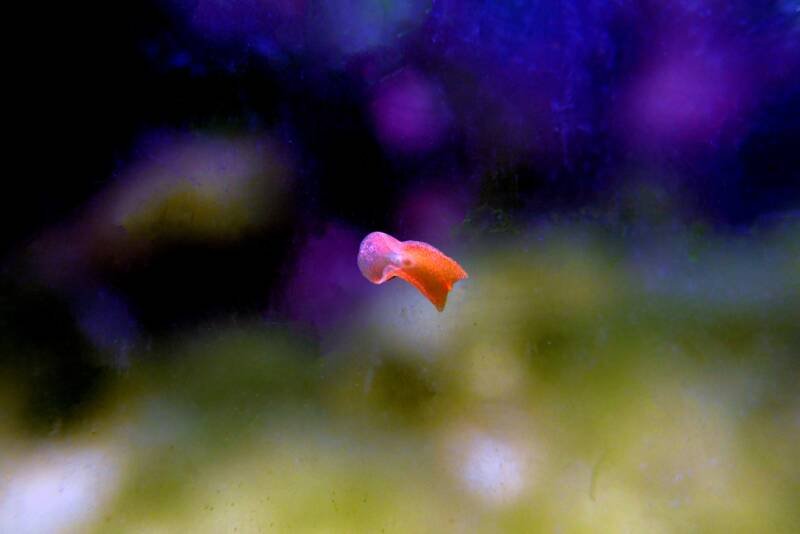 In my dwarf puffer tank, my LARGE outbreak of planaria feasted on the finest of frozen bloodworm scraps and was bright red because of it.

How Did Planaria Get in My Fish Tank?

Hitchhiking. In my personal experience, they’re some of the best aquarium hitchhikers around.

Decorations, live plants, snails, shrimp, and even fish can bring planaria into your aquarium. This is a good reason why I quarantine new additions to my aquariums, even my plants.

Quarantining is truly the least fun aspect of success in the hobby. It is so important, though.

I know it’s incredibly difficult to wait to plant that new plant or drop in some new shrimp friends, but it’s gotta wait, especially in an established aquarium.

I highly recommend having an established quarantine tank as part of any hobbyist’s setup.

From treating individual fish for sicknesses to preventing outbreaks such as planaria, ich, or flukes, quarantining is incredibly important to preserving your pets’ life and your own sanity.

Sometimes quarantining your newest specimens isn’t enough, and something slips through the cracks.

I had a bad outbreak when live black worms from my LFS were contaminated with planaria. They took over easily because, like other carnivores, dwarf puffers are messy eaters who produce a lot of waste.

One night I came into my fish room to check a loud filter and saw them on every surface of the poor puffer tank.

There was more than enough Omega One Frozen bloodworm and snail corpses from my puffer family’s terrible eating habits to sustain a THRIVING population of pesky planaria. This sent me down the planaria rabbit hole.

But are Planaria in the Aquarium Good or Bad?

Depends. See a couple of planaria get chomped on by your betta?

You’re probably okay. They’re a tasty snack for some fish. Not a lot, though. They’re not very tasty, again due to that slime they produce.

See hundreds of them leaving trails of slime on the glass in your shrimp show tank?

That’s NOT good. You’re gonna want to deal with that as soon as possible. Shrimp eggs and shrimplets are a tasty meal for some species of planaria.

You see, according to this paper (PDF), planaria secrete a mucus much like that secreted by humans in our sinuses.

This slime allows planaria to adhere to vertical surfaces like snails but also has a sinister effect on baby shrimp. It traps them, and in some cases, is toxic, containing tetrodotoxin, allowing planaria to prey on shrimp and other small invertebrates.

This mucus is a foul-tasting substance most fish don’t enjoy. Surprisingly though, some bettas enjoy munching on them.

What Should I Do?

Again, it depends. Let’s look at your options:

Leave them. If you see one in your betta tank after getting a sweet new plant from r/aquaswap on Reddit, he’ll probably munch it.

Get a trap, like this one. Some people have luck with them. I have not, so I can’t truly recommend them.

Alright. You’ve realized these worms have to go. They’re ugly, they eat your precious shrimplets, and the way they glide across the glass of your aquarium sends shivers down your spine.

This is one of the only successful techniques I’ve utilized to treat planaria. Luckily, it’s a fairly quick, easy treatment.

I MUST issue a warning before you continue, however. I am not a veterinarian, and this is not medical advice.

You MUST use fenbendazole in your aquarium carefully and be ready to clean up after treatment.

This is a dangerous medication to certain animals. If you have any snails in the aquarium you are treating you want to keep alive, remove them. It will kill them.

Clean up the planaria corpses as well as you can. When they start to decompose, they will release a lot of ammonia, causing a dangerous spike. In small enough aquariums, this can cause disaster.

If you haven’t replaced enough water while vacuuming out the remains, do a water change. Whenever I medicate an entire fish tank, I tend to do at least a 25% water change.

Planaria are pretty despicable and, in some cases, outright dangerous to the inhabitants of your aquarium. I’ve had my share of trouble with them, and hope you can learn from my experience.

Leave any comments or questions below, and as always, thanks for reading!