Pictus catfish (Pimelodus pictus) is one of the most stunning catfish varieties available commercially, so it’s no wonder that people get tongue-tied the first time they see them.

Despite their preference for caves and hiding spots, their appearance in the tank makes for a beautiful treat that many aquarists adore.

Though these fish are not recommended for a beginner due to their large gallon requirements and community stocking restrictions, they are otherwise hardy and peaceful fish.

This catfish may not prefer to be overly active during the day, but their busy nightlife and voracious feeding schedule more than make up for this.

They are interesting to watch not only because of their coloring but also because of the complex social lives they hold and the natural behaviors they display in tanks that mimic their South American habitat.

This aquatic beauty features striking black spots against a snowy silver base that would make any Dalmatian jealous. Its impressive barbels, similarly colored, reach all the way back to its caudal fin, and their pectoral fins are extremely sharp.

It has a long and slender body that can grow up to 5 inches long and easily lives up to 10 years with proper care and diet. Like most catfish, it has a downturned mouth so that it can more easily scavenge.

The size and longevity of pictus heavily depend on the quality of the water and diet it is provided in captivity. 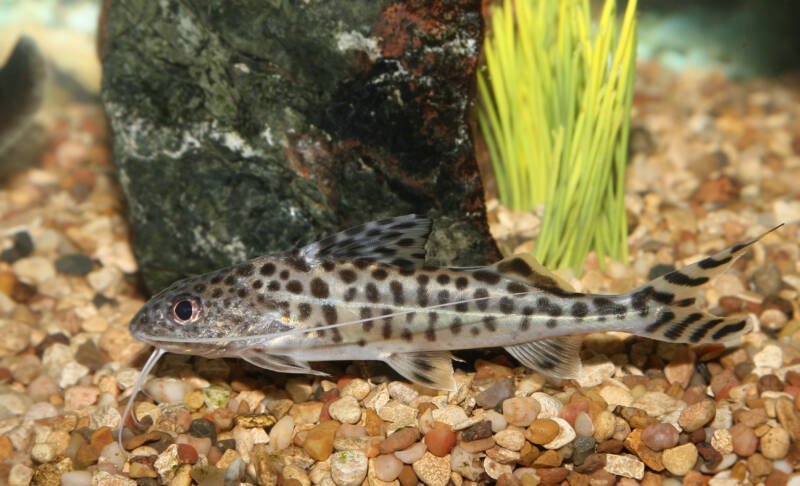 Its coloring and features have given rise to a variety of nicknames, including the spotted catfish, pictus cat, and angel cat. This last nickname is also a nod to the Angelicus catfish, a separate species that the pictus are often confused with.

The pictus catfish is very peaceful and easygoing, making it a strong contender for community tanks.

It is a bottom-dweller and should be the primary inhabitant for that level of the tank, but otherwise gets along with a variety of other peaceful fish and invertebrates.

However, there is one notable exception to its otherwise-tranquil temperament: when it’s hungry. A hungry pictus is an aggressive pictus, and its stomach may drive it to search out its next meal from among its fellow tankmates.

These catfish were originally found in warm and sandy riverbeds along South American rivers and streams, but have also been found as far out as Peru. They inhabit areas that have both heavy plant cover and open swimming space and eat a variety of live foods and plant matter.

Compared to other catfish, pimelodus pictus are very active swimmers and will become particularly lively in the evening and at night. They are found in shoals, though the average size in the wild varies by the report.

How to Prepare Your Pictus Catfish Tank 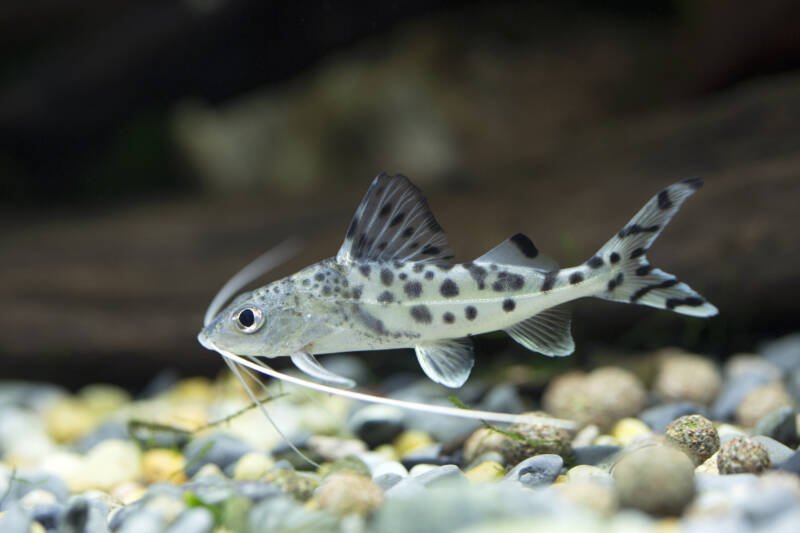 The pictus catfish requires an absolute minimum of 55 gallons for an individual.

However, this is a shoaling species and should be kept in groups of at least six. Because of this, aquariums of at least 200 gallons are recommended.

These fish are very active and may explore all levels of the aquarium at different times, although they obviously much prefer the lower levels and will spend most of their time there.

In addition to a large tank, pictus catfish also require both planted and open spaces. These requirements, as well as other elements of the aquarium setup, are discussed below.

These elements are all fairly basic on their own, but it may be difficult to strike the correct balance when combining them.

Recreating the natural habitat of the pimelodus pictus becomes more complicated when aquarists also take into consideration their behaviors and community interactions.

A variety of equipment is both required and recommended when setting up an enclosure for pictus catfish. Because of the size of the enclosure, larger and more powerful equipment is necessary to keep the water clean and oxygenated.

The significant bioload of the catfish makes this even more important. Such equipment may include:

This equipment may be more costly because of its size and the necessary power, wattage, etc., but there are many quality and affordable options available on the market.

Those interested in introducing pictus catfish to their community tank or starting a new enclosure specifically for these catfish should take care to mimic their natural habitats as closely as possible to bring out their true behaviors and brilliant coloring. 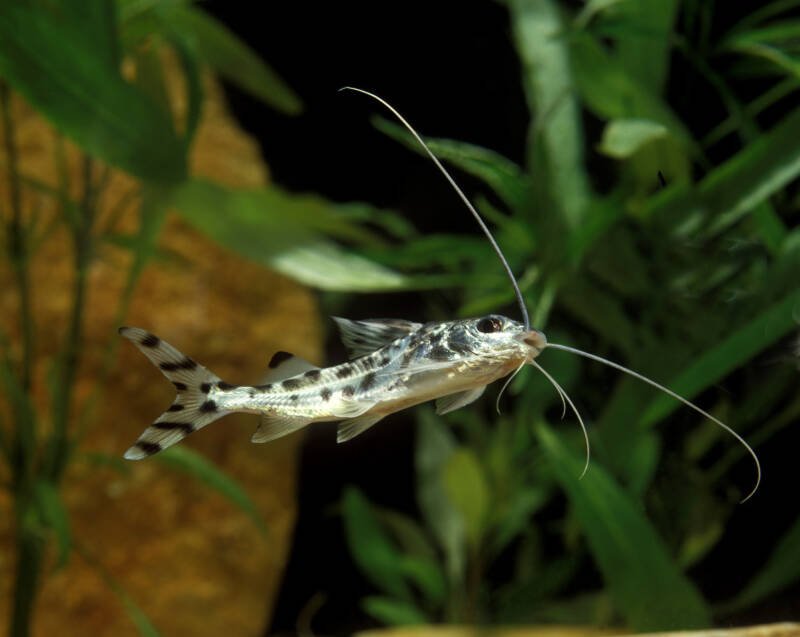 The water parameters that pictus catfish prefer are similar to other tropical species and are not hard to maintain with steady vigilance and the proper equipment.

Making sure to adhere to the water parameters listed above will ensure the pictus catfish is comfortable, stress-free, and healthy. And as with any fish, these three elements are the key to creating a thriving tank.

To ensure you have a peaceful tank and avoid any accidental snacking, it’s best to stock other soft water fish that the pictus can’t prey on.

Giant danios, opaline gouramis, and other catfish are three popular community species that have been kept successfully with pictus catfish in the past. Below are some options you should avoid, however:

Stocking a community tank can certainly be difficult given the rules above, but is still certainly doable with some patience and time.

Trials and errors tend to have serious consequences (i.e., the pictus will eat the other fish), so it’s best to do research beforehand and make absolutely sure all the fish will be compatible.

Pictus catfish are not picky eaters and will consume almost anything you put in the tank. However, a high-quality pellet food should form the base of your diet.

Make sure the pellet is a sinking pellet variety so that it will reach the catfish’s hiding places. The pellets can then be supplemented by any of the following foods:

Live, freeze-dried, and frozen foods are all acceptable and will be readily eaten. This is one fish that should be allowed to eat its fill during meal times, as hungry pictus catfish can become aggressive and go after other tank inhabitants as their next meal.

Though the pictus catfish doesn’t appear to be a fussy breeder in its natural habitat, it is extremely difficult to breed them in captivity and there have been no successful reports of it in home aquariums. Larger commercial setups, such as aquariums, may have more success.

Part of this is due to the sheer gallon size that is required for these fish to reach sexual maturity.

As stated earlier, individuals can survive in a minimum of 55 gallons and shoals need at least 200 gallons. However, to reach sexual maturity and display breeding behavior, each group would need double that size (so at least 100 and 400 for individuals and shoals, respectively).

If aquarists were to observe the pictus catfish mating and breeding, we know that the female would lay eggs that the male would then fertilize.

Despite their unique appearance, pictus catfish are subject to the same common health issues and diseases as other freshwater and tropical fish. Of these, ich is the most prevalent illness. To make sure you’re prepared for this, consider stocking some of the medicines covered below.

Many diseases can be traced back to stress and poor water quality, which weakens a fish’s immune system and leaves them vulnerable to attack.

To prevent this, only buy healthy fish and make sure to quarantine them before introducing them to the main tank. After purchase, make sure to regularly check tank inhabitants to confirm they’re both happy and healthy.

These fish may be temperamental during feeding time, but are otherwise safe for and even thrive in community tanks.

They can also be kept in species-only shoals for a coordinated display of striking beauty. The relative simplicity of the pictus catfish’s silhouette is belied by its bold demeanor and active social life.

This catfish is not recommended for beginners unless such aquarists are dedicated to this species and are prepared to dedicate the necessary time, money, and care to their upkeep.

Even advanced fishkeepers should be prepared for the sometimes rigorous requirements that come with keeping such an austere species.

But if tank owners are interested and willing, the pictus catfish is a unique and exquisite specimen to add to your collection!